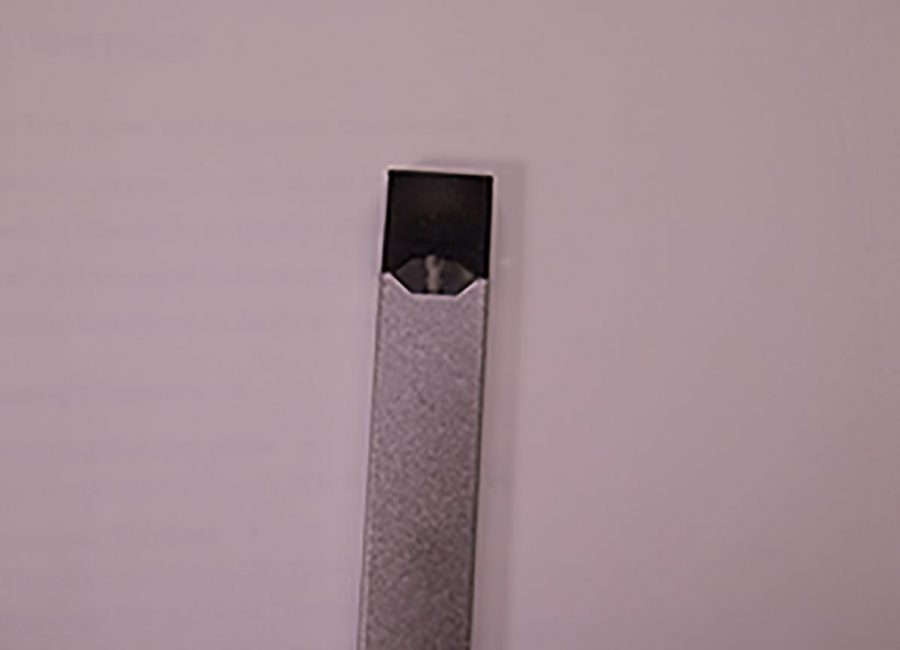 The Juul vape device has increased teen vaping because it is easy to hide and readily available.

Over the past several months, there has been a vaping trend growing in our school, in our town, and around the nation. Vaping is unhealthy, and it is a trend that requires action. Vaping in school is a problem, and has even recently been recognized on a state level by Oklahoma governor, Kevin Stitt, signing legislation that puts vaping on the same level as tobacco products in schools.

Vaping first started as a way to help smokers get away from the dangerous lifestyle of cigarettes. Recently, however, the vaping trend has risen dramatically.

In a recent poll by The Claw, of 71 students responding, 23 say they never vaped, 21 have experimented, 21 vape sometimes, and 6 vape regularly. When asking over 20 students in person, only two said that they have never vaped.

One student didn’t realize there was a problem.

“Nope, but I have been offered, and if it is going on at school, it’s a problem,” Student 5 said.

However, students who do vape had a variety of responses.

“It’s not any of the teachers’ business if kids vape. I dipped for six years, and kinda switched to vaping because it is not easy to just quit,” Student 4 said.

Students realize it is a problem but think it is minor compared to other issues.

“I have vaped since 6th grade, and I vape almost a Juul pod a day. I’ll say it’s a problem, but it isn’t the worst problem in Canton High School,” Student 6 said.

Vaping is relatively new, and it is spreading like wildfire among teens. While several kinds of research have been done, there are still many side effects caused by vaping. According to the website www.webmd.com, vaping can cause popcorn lung, chemicals in it cause cancer, a dry cough that won’t go away, shortness of breath, wheezing, headache, and fever are among those found so far.

“When vaping first came out, I thought they were cool, so yeah, I vaped. Then I did a little research, found out they were bad, and said, ‘No, I quit’,” Student 3 said.

Some students are realizing after recent news reports that they need to quit for themselves.

“Yes, I vape every day, but I am trying to stop. I stopped smoking cigarettes and started vaping. I feel like it is a problem everywhere. Almost everyone does it, even people that you wouldn’t think do it. I have been vaping for four months,” Student 1 said.