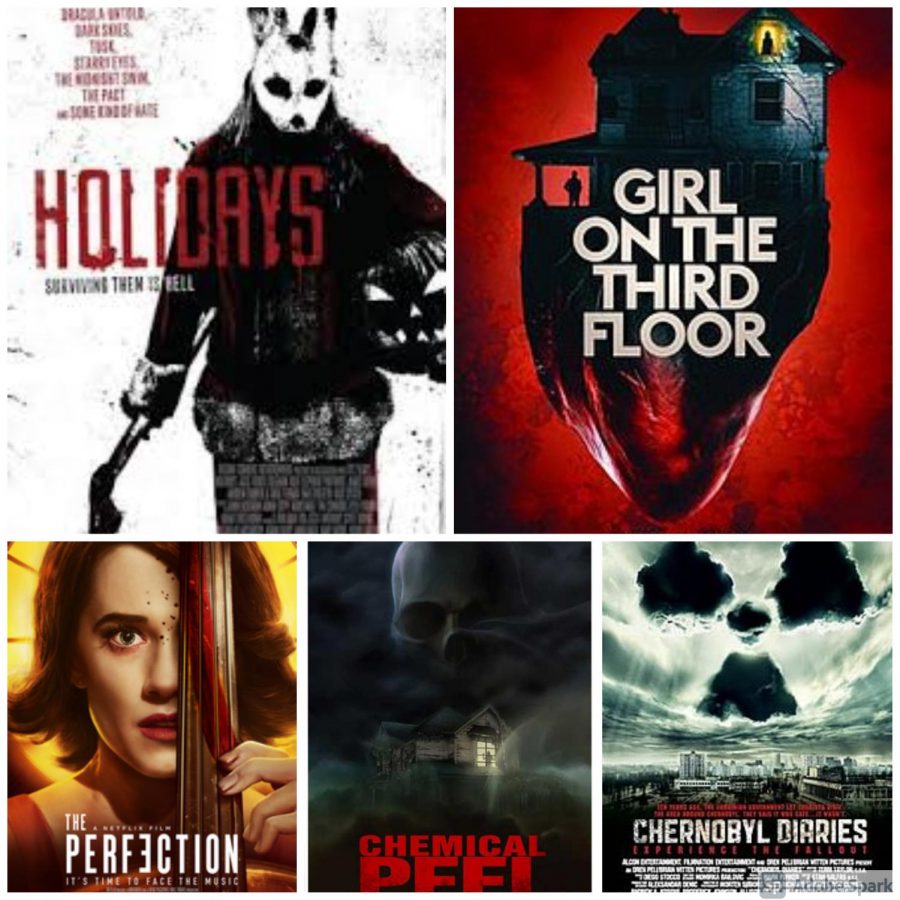 Scary movies are on the rise once the month of October starts. Many film companies try to release their more daring films during this time of year because it gets everyone ready for the holiday. Here is my personal list of raunchy films that help get the October vibes rolling.

Holidays was released in 2016 and never fails to make people feel a little queasy. It’s a collection of short horror films based around different holidays. From Valentine’s day to New Year’s Eve, this movie is full of raunchy scenes.

What’s worse than watching people’s skin start to peel off? Watching a woman throw up bloody chunks of her own stomach, that’s what. Thanks to a derailed chemical train, a bachelorette party gets gory. One of my favorite scenes in the movie is when a woman takes a shower to clean off the blood of her dead friend, only to get dissolved into bones thanks to contaminated water. This movie is packed full of disgusting scenes of bodies being eroded and is perfect for those with a strong stomach.

I am not going to lie, I only watched half the movie because it sucked so bad. A young cellist named Charlotte Willmore meets her cello idol, Lizzie. The two become lovers and they decide to travel to China. I was okay with the movie until I saw the CGI worms crawling under Lizzie’s skin. That is when I gagged and turned Netflix off.

When a group of tourists goes on an extreme tour of Pripyat, the town that was abandoned after the Chernobyl reactor had a meltdown. They realize that the animals that have been hanging out in the town have been severely radiated. The group gets stuck in Pripyat after their van’s spark plug is missing. They have a few hours at most to get out before they start getting harmful radiation. When night falls, creatures come out and start attacking the stranded tourists. Only one person survives the entire movie. The last survivor finds out a horrible secret behind the creatures roaming Pripyat.

Girl On The Third Floor

I don’t even know where to start with this one, it is so bad that it’s good. When a man named Don Koch moves into a new house in a new town, he finds out that it’s more than he bargained for. This movie has some sexual themes, but it also has lots of cringe-worthy gore scenes. Koch gets attacked by marbles and they slip under his skin. Koch takes a box cutter and tries to cut them out of his skin. I have watched this movie like three times just because I like showing people how raunchy this movie is.