Christmas In the Park 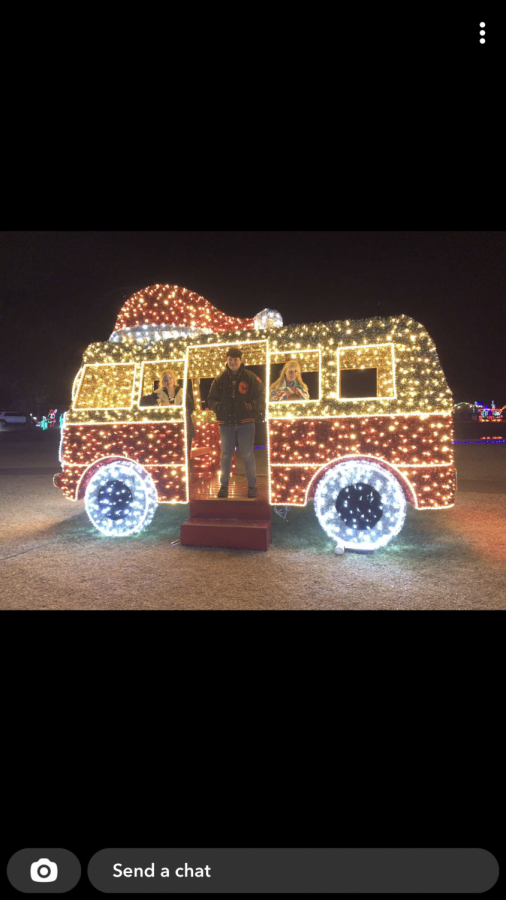 Most people enjoy Christmas lights and decorations. My family and I are no exception, so we recently took the short drive to Yukon to see one of Oklahoma’s more widely known light displays. As with most public attractions, it wasn’t without its flaws, but all in all, we will probably do it again.

When we finally made it to Yukon, it took my mom about 20 minutes to realize where we needed to be and how to get there. The wait was long and tiring, and people tried to cut in line everywhere. Once we got closer, the line seemed to move a lot faster. When we entered the park, we drove through some of it until we got to a place with available parking.

Once we got to a parking place, my mom parked, and we got out and started to walk around. The first thing we noticed were these beautiful light-up Christmas trees that change colors. They were a great place for a photo opportunity. Then we made our way over a lit-up bridge where they had cute lights displayed and other decorations. After we crossed the bridge, 2 paths could be taken, and we probably took the wrong path, because everything was backward.

Once we finally got on the right path, everything was so beautiful. They had this pretty lit-up hippy van. They also had cute ornaments that we could stand in and take pictures of. We ended up taking this other ghetto path, and at some points, they didn’t have any lights. It was a little creepy and somewhat reminded me of Canton’s park.

For how many cars there were, walking around it never felt very crowded. Some people were not “rude”, but they didn’t have common courtesy. At times,  our group would be waiting to take a picture when all of a sudden another group of people would jump in front of us. The worst part was that it was older adults who should know how to act.

It is completely free to get into the park, but donations are accepted. Masks are not required. They are open 6-11 every night through New Year’s Eve. They have many selfie stations and a train that visitors can ride on for a small fee. It is a 5-mile walk if guests choose to walk the whole thing, which makes up over 500 lighted displays. Santa also makes an appearance on Friday and Saturday nights.